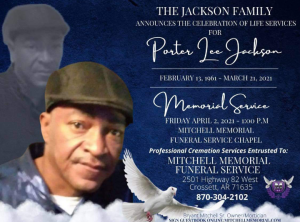 Cremation arrangements are under the direction of Mitchell Memorial Funeral Service of Crossett, AR.

To send flowers to the family or plant a tree in memory of Porter Lee Jackson, please visit our floral store.

You can still show your support by sending flowers directly to the family, or by planting a memorial tree in the memory of Porter Lee Jackson